According to PWC estimates, the Metaverse will reach a market cap of 1.5 trillion dollars by 2030. Major players like Facebook are announcing significant investments in the Metaverse. This has caught the eyes of the industry and investors and can pave way for potentially huge returns.

What is metaverse and why is everyone investing in it

Facebook recently announced a shift in their focus towards the next generation augmented reality and virtual reality capabilities and to spend ~$10 billion on the same.

“We are committed to bringing this long-term vision to life and we expect to increase our investments for the next several years,” the company wrote in its third-quarter earnings release this afternoon. Facebook sees AR and VR as being core to “the next generation of online social experiences.” CEO Mark Zuckerberg [0] (the verge)

Metaverse is a virtual world theoretically capable of inhabiting a large number of users. On paper (check and charge to for the record) it can inhabit accommodate a population exceeding our current population but requires an equally compatible infrastructure. Even so, it has millions of users in its current state. Metaverse blurs the line between the real and virtual world; with technologies such as AR, you will no longer be able to distinguish between what’s ‘real’ and what’s not. The idea is to create a life-like experience with you being able to alter the reality at your will.

Humans tend to modify the environment for their purposes and obtain services from it, eventually creating an ecosystem for interactions and communications. It’s the fundamental way of living, and metaverse aims to transform it. Metaverse is going to be a landmark in the history of technology which will lay the foundation for the future of social interactions and how we are structured as a species. It is set to alter the norms of being a social being. The components of metaverse are all set to become more and more mainstream in the next 5-10 years.

Figures for 2022 are not actual figures, shown as per estimates

Via: Statista (in millions)

The statistic shows the number of virtual reality (VR) and augmented reality (AR) users in the United States from 2017 to 2023. In 2020, 83.7 million people used AR at least once per month in the United States. The corresponding figure for 2023 was forecast to reach over 150 million users.

Due to the pandemic, the work environment has changed a lot, it progressed us with technology at an unprecedented rate. Paving way for people to work remotely. Bill gates said that those changes will only intensify in the years to come and remote working will pull more and more people into the metaverse. He believes that working in a metaverse will be a significant step up from what we currently get with most video conferencing platforms like zoom or Microsoft Teams, you would have a 3D avatar that would be able to attend meetings in a virtual office where can interact with your co-worker’s avatars.

Meta introduced horizon work rooms, where people can work in virtual workspaces as more and more companies try to jump into as early as possible, the major players like Microsoft is now using holograms and creating mixed and extended reality applications, the American tech giants also owns Minecraft a vast virtual world having millions of players,  another platform that kids can’t seem to get enough of is Roblox, it has partnered with several brands including Ralph Lauren to bring unique experiences to the metaverse. Microsoft is also working on high priority metaverse use cases of metaverse in engineering, construction and military.

The history of human communication & interaction can be traced back to the very first record of exitance of humans. But it wasn’t until recent years we advanced to the new era of communications enabled by technology. 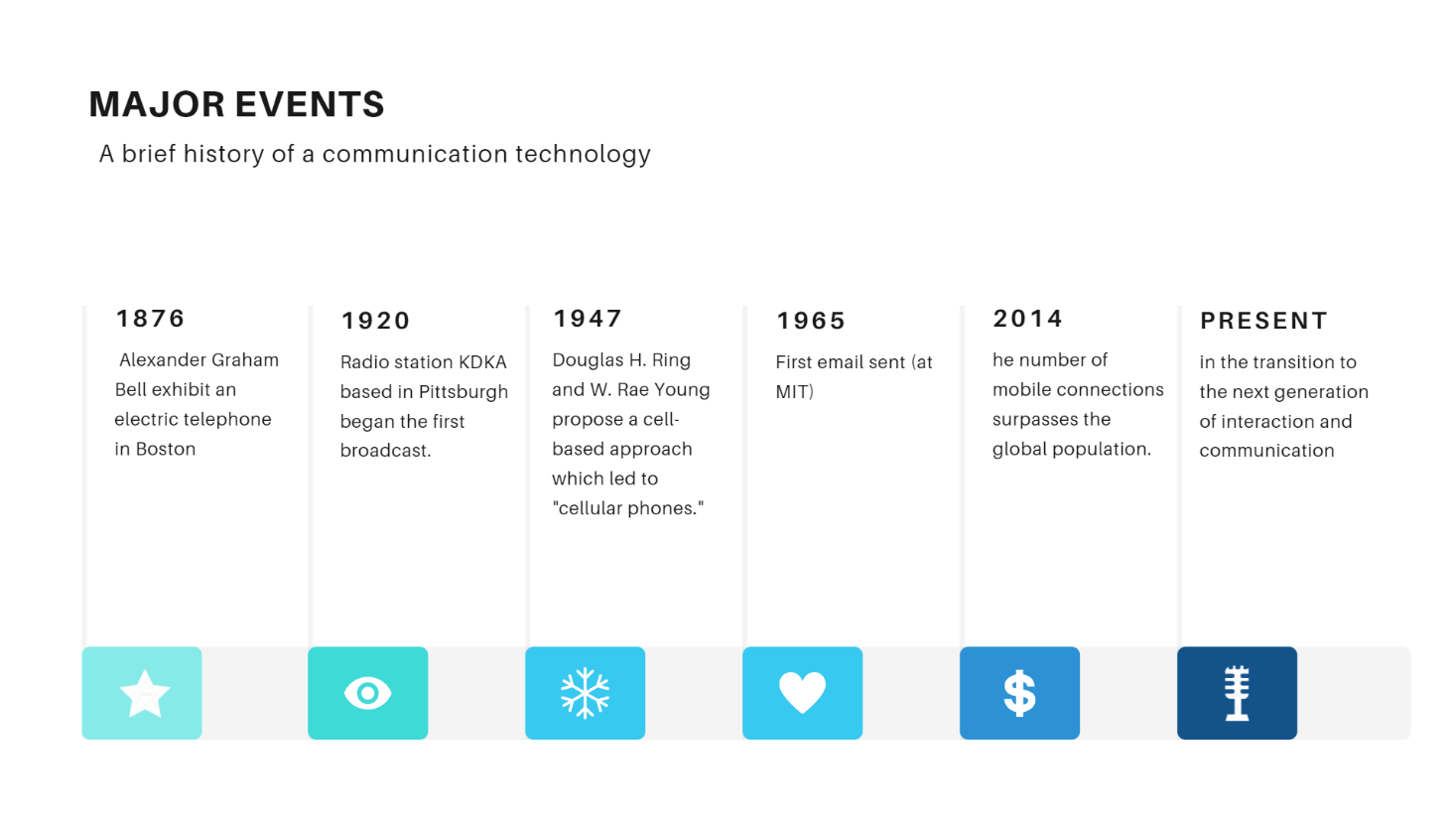 The timeline marks major flags from 1876 when Alexander Graham exhibit an electric telephone, to almost 100 years later in 1965 the first email was sent, to the recently that the communication mediums were adopted globally, As of January 2021 there were 4.66 billion active internet users worldwide – 59.5 percent of the global population. Of this total, 92.6 percent (4.32 billion) accessed the internet via mobile devices. [1] (Wikipedia)

Things changed when apple introduced the first iPhone, it took apple 5 years to build upon the first iPhone, in 2002, Steve Jobs commented as follows: “kick-start the market for next-generation mobile phones in the same way that the company’s computer popularized personal computing.”

This laid the cornerstone in the infrastructure of metaverse for coming years. Companies like Nokia, Motorola failed to identify the waves and got wiped out of the market.

Logically enough companies like Meta don’t want to miss on the next “big thing” and are pouring billions of dollars each year in building metaverse and other related disruptive technologies.

Metaverse isn’t just another gimmick or “just another game” it will fundamentally alter how we as humans interact and will change the professional environments, it can unable to experience learning like never before.

On October 28th, Facebook rebranded itself as Meta, to embrace the metaverse its building. A shared virtual world Zuckerberg is planning big on. He believes metaverse to be the future of human connection and is betting big on the tech. the mission remains the same “to bring people together”.

“The metaverse is the next evolution of social connection. Our company’s vision is to help bring the metaverse to life, so we are changing our name to reflect our commitment to this future.”

Mark Zuckerberg, CEO`s commentary on metaverse from Q3 earnings call transcript highlights give a better picture to as where Meta is headed

“Beyond Reels and commerce, I also want to share some thoughts on our longer-term efforts to build the next computing platform and help bring the metaverse to life. This is a major area of investment for us and an important part of our strategy going forward.”

“I can talk about the metaverse and Reality Labs part of this. So, for the next 1 and 3 years, especially, I think what you’ll see is us putting more of the foundational pieces into place. This is not an investment that is going to be profitable for us anytime in the near future.”

Facebook view the technology and quote it as “the holy grail of online social experience”. Over the decade they believe metaverse will be more developed and may have at-least a billion users. Their goal is to help metaverse reach “reach a billion people and hundreds of billions of dollars of digital commerce” this decade.

Facebook plans to invest $10 billion in the market and they have started to gain some traction, they beat Sony in Q2 2021 VR headset sales.

According to Counterpoint Research, the new goggles helped the company gain a share of 75 percent of XR headset shipments in Q1 of 2021, up from just 34 percent in Q1 of 2020. In 2018 and 2019, Sony’s market share at around 40 percent had still exceeded that of Oculus at the time.[2] (Statista)

After changing the name to Meta, they also announced that they will be reporting the financials in a new structure “Our corporate structure is not changing, however, how we report on our financials will. Starting with our results for the fourth quarter of 2021, we plan to report on two operating segments: Family of Apps and Reality Labs.”

This will give us a better review and a closer perspective of hoe they are spending the resources on the big tech.

As Facebook quoted in their 3rd quarter 2021 release “We expect our investment in Facebook Reality Labs to reduce our overall operating profit in 2021 by approximately $10 billion. We are committed to bringing this long-term vision to life and we expect to increase our investments for the next several years.”

Their $10 billion investment might not be profitable in the short term and may affect the financials, but it is an investment on the fundamental level which will turn out in favour of Facebook and as evident from historical trends of Facebook they have a tendency to turn huge investments into profits.

“Our ability to retain, increase, and engage our user base and to increase our revenue depends heavily on our ability to continue to evolve our existing products and to create successful new products, both independently and in conjunction with developers or other third parties. We may introduce significant changes to our existing products or acquire or introduce new and unproven products, including using technologies with which we have little or no prior development or operating experience. For example, we do not have significant experience with consumer hardware products or virtual or augmented reality technology, which may adversely affect our ability to successfully develop and market these products and technologies. We continue to incur substantial costs, and we may not be successful in generating profits, in connection with these efforts. In addition, the introduction of new products, or changes to existing products, may result in new or enhanced governmental or regulatory scrutiny, litigation, or other complications that could adversely affect our business and financial results. We have also invested, and expect to continue to invest, significant resources in growing our WhatsApp and Messenger products to support increasing usage of such products. We have historically monetized messaging in only a limited fashion, and we may not be successful in our efforts to generate meaningful revenue or profits from messaging over the long term. In addition, we are moving forward with plans to implement end-to-end encryption across our messaging services, as well as facilitate cross-app communication between these platforms, which plans have drawn governmental and regulatory scrutiny in multiple jurisdictions.” Facebook 10k filing 28 January 2021

Facebook has always been “the name” when it comes to social media and connecting people through the internet, one cannot simply talk about virtual interactions without talking about Facebook, it has its fair share of scandals but it has been revolutionary in the industry on the forefront of making the virtual interactions mainstream.

[Analyst: Rakshit Chauhan Email: Info [at] MarjanInvest.com Disclaimer: This is not financial advice customized for your needs. Please consult your financial advisor before making any investment decision. While a reasonable effort has been made to ensure accuracy of the content, no guarantee is given nor responsibility taken by us for errors or omissions and we do not accept responsibility in respect of any information or advice given in relation to or as a consequent of anything contained herein. Please do your own due diligence before investing.]